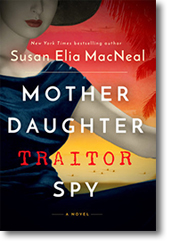 June 1940. France has fallen to the Nazis, and Britain may be next — but to many Americans, the war is something happening “over there.” Veronica Grace has just graduated from college; she and her mother, Violet, are looking for a fresh start in sunny Los Angeles. After a blunder cost her a prestigious career opportunity in New York, Veronica is relieved to take a typing job in L.A. — only to realize that she’s working for one of the area’s most vicious propagandists.

Overnight, Veronica is exposed to the dark underbelly of her new home, where German Nazis are recruiting Americans for their devastating campaign. After the FBI dismisses the Graces’ concerns, Veronica and Violet decide to call on an old friend, who introduces them to L.A.’s anti-Nazi spymaster.

The women go undercover to gather enough information about the California Reich to take to the authorities. But they longer they stay, the more the Grace women realize that the plots they’re investigating are far more sinister than they feared — and even a single misstep could cost them everything.

Inspired by the real mother-daughter spy duo who foiled Nazi plots in Los Angeles during WWII, Mother Daughter Traitor Spy is a powerful portrait of family, duty, and deception that raises timeless questions about America — and what it means to have courage in the face of terror.

Nominated for a 2022 Macavity Award! 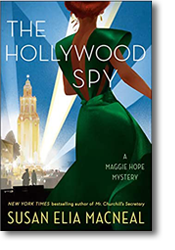 Los Angeles, 1943. As the Allies beat back the Nazis in the Mediterranean and the United States military slowly closes in on Tokyo, Walt Disney cranks out wartime propaganda and the Cocoanut Grove is alive with jazz and swing each night. But behind this sunny façade lies a darker reality. Somewhere in the lush foothills of Hollywood, a woman floats, lifeless, in the pool of one of California’s trendiest hotels. When American-born secret agent and British spy Maggie Hope learns that this woman was engaged to her old flame, John Sterling, and that he suspects her death was no accident, intuition tells her he’s right. Leaving London under siege — not to mention flying thousands of miles — is a lot to ask. But John was once the love of Maggie’s life… and she won’t say no.

Maggie is shocked to find Los Angeles as divided as Europe itself — the Zoot Suit Riots loom large and the Ku Klux Klan casts a long shadow. As she reels at the hatred in her home country, she can’t help but wonder what it will be like to see her lost love once again. But there is little time to dwell on memories once she starts digging into the case. As she traces a web of deception from the infamous Garden of Allah to the iconic Carthay Theater, she discovers things aren’t always the way things appear in the movies — and the political situation in America is more complicated, and dangerous, than the newsreels would have them all believe.