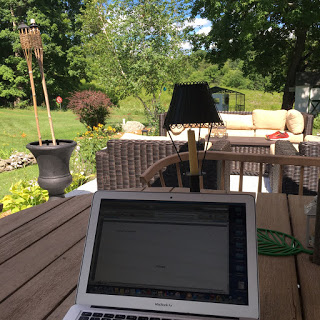 SUSAN ELIA MACNEAL: It’s summer, and I’m desperately trying to balance family time and working on THE PARIS SPY (Maggie Hope #7). This basically consists of taking my computer on our family vacations to Hudson, NY and Providence, RI.

So far I’ve worked — and missed going on a water park adventure, a hike, to a horse show, and a barbecue.
And I’ve also played hookey from work (don’t tell my editor!) — to go to the horse stables to watch kiddo, have a lunch date at an amazing French place with my husband, and go swimming with all the kids and then take a nap in a hammock. 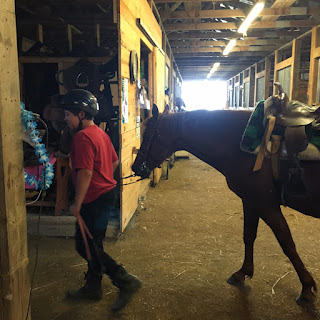 I think the solution is to be fully present in whatever mode I’m in — family or work— but it’s hard. This summer, especially, I seem to be struggling. Whenever I’m doing one, I’m worrying about what I’m missing on the other side. There’s just always this feeling of not having enough time.

Right now we’re driving from Hudson, NY to Providence and I’m writing this blog post from the backseat of the car, with my computer propped up on my travel bag, while kibitzing on the conversation going on right now: “Why Aren’t Eleven-Year-Olds Allowed to Drive?” (Kiddo is saying that they should; Daddy is providing the counter argument.) 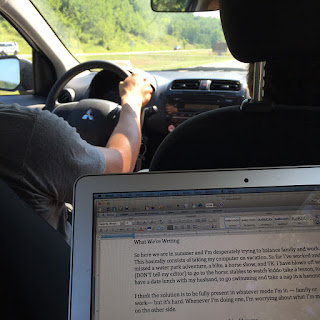 I don’t know that there’s a solution to this work/life dilemma. But I have been lucky enough to have a loyal writing buddy, Zola, on this leg of the vacation. She’s an elderly black lab mix who likes to curl up and sleep near me as type. When her family’s around, she loves them. And when they’re gone, she naps (her “work”). I love her. “Be like Zola” is perhaps the wisest thing I’ve come up with so far. It’s my new mantra.
Hey, we’re getting closer to the October 4 release of THE QUEEN’S ACCOMPLICE! Here’s the description from Penguin Random House:

Spy and code-breaker extraordinaire Maggie Hope returns to war-weary London, where she is thrust into the dangerous hunt for a monster, as the New York Times bestselling mystery series for fans of Jacqueline Winspear, Charles Todd, and Anne Perry continues.

England, 1942. The Nazis’ relentless Blitz may have paused, but  London’s nightly blackouts continue. Now, under the cover of darkness, a madman is brutally killing and mutilating young women in eerie and exact re-creations of Jack the Ripper’s crimes. What’s more, he’s targeting women who are reporting for duty to be Winston Churchill’s spies and saboteurs abroad. The officers at MI-5 quickly realize they need the help of special agent Maggie Hope to find the killer dubbed “the Blackout Beast.” A trap is set. But once the murderer has his sights on Maggie, not even Buckingham Palace can protect the resourceful spy from her fate. 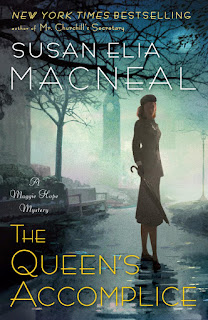 And the first review, from Kirkus, lauds THE QUEEN’S ACCOMPLICE: “Maggie … is a thoughtful spy whose dangerous escapades never disappoint.” Thank you! To celebrate, I’m giving away an autographed ARC to one lucky reader, who posts in the comments.
In the meantime, here’s the prologue of THE QUEEN’S ACCOMPLICE. Enjoy!
The winds were changing.They were blowing in from the east now, Vera Baines noted, from the East End. Even though the air raids had stopped for the moment in London—as Hitler turned his attentions toward Russia—the docks, railroads, and factories were still burning. Through her open bedroom window, she could smell cold wind scented with smoke and destruction. She watched as it ruffled the bare black branches of the trees of Regent’s Park, rustling dead ivy.

Since the war had begun, the park had become a desolate expanse of meandering walkways, overgrown shrubbery, and long air-raid trenches—an ideal location for crime.
But not on her watch. As an ARP warden for her section in Marylebone, Vera Baines knew not only the winds but the intricacies of light and dark. Sunset in London in late March 1942 arrived after six, but the violet shadows began to lengthen at least an hour earlier. This evening’s sunset was extraordinary—bright red, with crepuscular rays piercing wispy clouds.

Despite barely clearing the five-foot mark and a slight figure, at eighty-three, Vera was a redoubtable woman. She was more wiry than frail, her energy giving the impression of her being much taller than she actually was. She had impeccable posture and moved with a force and confidence her friends and family hadn’t seen since her husband died ten years ago. And her face, with its high cheekbones and clear blue eyes that missed nothing, radiated strength.

Vera hated the war, hated the loss of innocent lives—but she couldn’t deny it had brought a certain clarity to her existence. As an ARP warden, she now felt she had a purpose: She would protect her own. As she surveyed the park’s deepening shadows from the window of her bone-colored Georgian terraced house, Vera felt responsibility, plus a fierce sense of love and pride. This was her London. These were her people. Nothing would happen to them on her sentry.

It was time to begin her shift. Vera took one last look at the fad- ing light, listening to the forlorn cries of the birds, then picked her way downstairs, leaning on the railing. At her door, she put on her ARP tin hat, dark blue wool overcoat, and gloves, and reached for her walking stick—with a silver British bulldog on the handle. Then she went down the outside stairs and onto the icy flagstone pavement, bracing herself against the wind. She paced the street with her usual vigor, the pale symmetrical Nash architecture reflecting the last light of the dying sunset. The temperature was dropping and the air smelled of imminent storms.

A passing white-haired man tipped his black bowler hat, and she nodded in return. “Oh, Mr. Saunders—” she called after him, her breath making clouds in the chill air.

“I noticed a chink in your blackout curtain on the second floor last night. Please see to it no light is visible from now on.”

He took a few steps forward and frowned down at her. “We haven’t had an air raid in months, dearie.”

Vera was not deterred by his bulk, his height, or his condescending tone. “And the Luftwaffe might be choosing tonight for a return visit, Mr. Saunders. Let’s not give them any light to guide them to us, shall we?”

She strode on, chin high, taking her usual route past the charred remains of Regent’s Park’s brick wall. The last of the sun’s light melted away, but Vera didn’t mind the dark; she liked being out alone at night. Without electric lights to pierce the darkness, the nighttime took on a new beauty in the icy bright moonlight. Her shuttered flashlight illuminated the strips of white paint on the curbs and tree trunks, giving off a ghostly glow.

In the distance, she could hear the sounds of the city: the faint rumble of motor traffic, the clip-clop of horses’ hooves on cobble- stones, the screeches and flaps of bats off to their night’s hunt. The wind picked up once again, causing the ancient tree branches to sway and creak, the dead leaves and lipstick-stained cigarette butts in the gutters to dance.

Without artificial light, Regent’s Park at night could have been any era in London—from the time when ancient Britons painted themselves blue, to the reign of Queen Elizabeth I, to the period of Victoria and Albert. Even the clocks obliged: When the Nazi bombs exploded, all nearby timepieces ceased to function, paralyzed at whatever time they were at the instant of impact. These comatose clocks were another reason Vera could imagine time telescoping—the suspended present creating an atmosphere where time travel seemed no mere fantasy. Really, anything seemed possible, especially in the shadows of night. It even smelled as it could have hundreds of years ago—the same stink of urine against the crumbling brick walls as there would have been in Pepys’s day.

In the darkness, Vera tripped and nearly fell, saved only by her trusty walking stick. “What the—?” she muttered, her grip in leather gloves tight on the silver handle. She righted herself, glad Mr. Saunders hadn’t been there to see.

She looked down at a long blanket-wrapped bundle. Leaning over, flashlight in one hand, she lifted and pulled back the wool covering with the tip of her cane.

Vera gave a sharp inhale, but didn’t cry out when she saw the butchered body of a young woman. The body looked to have be- longed to a girl in her early twenties—healthy and athletic, hair curled. Her throat had been slashed so savagely her head was nearly severed from her body. Her belly had been slit through her ATS uniform, which was soaked through with blood.

Vera felt as if she’d been struck dumb. But she swallowed, braced her shoulders, gathering her strength. “Murder!” she managed to croak. “Murder!” she cried, louder this time. “Someone— someone fetch the police!”

A blond boy in a tweed cap walking past stopped and stared. “What the devil’s going on? Are you all right, ma’am?”

Vera lifted her chin, squared her shoulders, and deployed the stiff upper lip she’d perfected over a lifetime of practice. “Yes, yes, of course I am,” she reassured him. “But I’m afraid she isn’t,” she added, pointing to the woman’s mutilated body with the silver tip of her walking stick.

The boy squinted in the darkness, eyes following the flashlight’s beam When he realized what he was seeing, he tore off his cap and crossed himself, whispering, “Bloody hell.” He looked from the body back to Vera. “She’s been ripped, ma’am.” He shook his head, his hands worrying at his hat. “Looks like she’s been done in by Jack the Bloody Ripper himself.”

“What are you going on about, young man?” Despite her occasional daydreams—or night dreams—Vera had no patience for macabre nonsense. But the boy was looking past her to the park’s brick wall, gaping at lettering.

With a shaking hand, Vera raised her flashlight. The words scrawled across the wall were painted the same ghostly, glowing white paint as the curbs.

They read, JACK IS BACK.